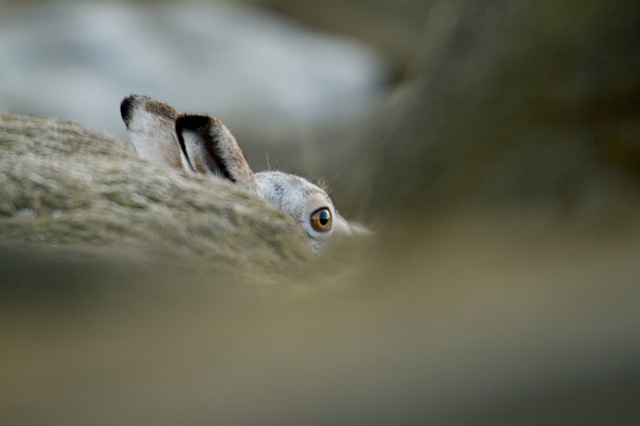 One thing I miss, having moved from the Highlands to the Peak District, is the wildlife: sea eagles and otters all seen regularly from my garden. But that’s not to say the moors of Derbyshire are devoid of life and it hasn’t taken me long to find a few favourite spots in which to wander. Red grouse are everywhere and in summer curlews and lapwings will return to add music to the moors. But what I didn’t expect to find, just a few miles from home, was a mammal that was more associated with the mountains of my old haunt of Knoydart: the mountain hare.

In seven years I only saw a handful of hares in the Knoydart hills but here in the Peak District I have seen dozens in just a few months. So why are they here? They are not present anywhere else in the Pennines. The answer is an unlikely one; the Victorians enjoyed shooting things, preferably fast moving birds like red grouse, of which there are plenty in the Peak District, but the appeal of blasting these birds out of the sky waned; they wanted to try something different. Mountain hares were fast and offered the perfect challenge. The problem was, there were no hares here – so they released some. One hundred years later the rifles have stopped firing and the hares are thriving. 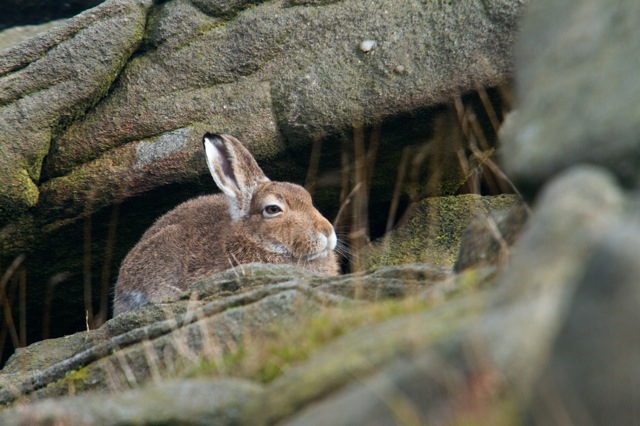 Nevertheless, they may now face a new threat. Mountain hares moult in the autumn, changing colour from grey/brown to pure white: camouflage against the winter snows. But if the changing climate results in snow falling later in the year, or not at all, the hares will find themselves far from camouflaged, their white fur standing out against a dark hillside. If, however, winters get longer and snowier this could increase the range of habitat for these animals – decreasing solar activity and a shutting down of the Gulf Stream would suit mountain hares just fine.

Mountain hares moult rapidly. The shot of the hare above was taken at the end of October; you can see the pelage starting to turn white in places. The shot of the hare at the top of this post was taken in mid-December. Despite freezing temperatures there was no snow lie and I spotted him and the rest of his band from half a mile away. A buzzard or fox would spot them even sooner.

Good for me though; makes it much easier to track them down, although it would be nice to get a shot of a white hare in the snow. I’ll be back after Christmas trying to do just that.

This entry was posted in Blog. Bookmark the permalink.